The time of cold short days, hoping for the next good weather window to get your fishing fix, is in the final stretch. Well, at least for some parts of the country. Spring came early this year. Once again we have been blessed with a mild warm winter in Charleston. Unlike last year that saw a continuation of Fall the left water temperatures near 70 degrees to January 1st and then got colder. This year we experienced an early short period of cold weather that brought water temperatures down into the low 50’s and have followed it with spring like conditions since nearly mid January.

This early Spring has turned early February into more like March. There are still schools of reds located throughout the waterways but in many areas they are breaking up to take advantage of the early feeding opportunities. Another of Winter’s traditionally lethargic feeders, the Speckled Trout, has been feeding more often than not. The area’s water has seemed to really come to life in the couple of weeks as water temperatures in 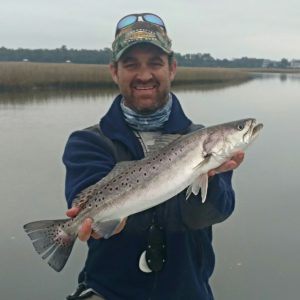 the rivers has stayed near 60 degrees.

The arrival of spring means long term warm weather and better fishing for the months to come. Early spring on the other hand can be feast or famine. The fish are more affected by cold fronts and pressure change than at any other time of the year. I have had days were I have gotten on schools of reds the seemed like they would never stop eating and then seen the same fish with lock jaw after a front comes though. The dropping barometric pressure that signals the approaching front is often like ringing a dinner bell. However the increasing pressure affects the swim bladders of these fish oft 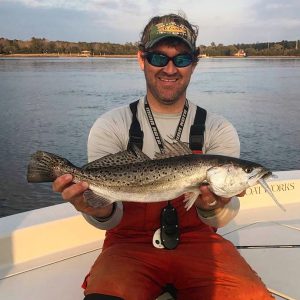 en making them resistant to eating until the pressure is equalized, especially on larger fish.

During post front conditions I like to remember theses 3 S’s. SLOW, SMALL, and SOFT. The fish after the front are going to be holding closer to the bottom and less active. This means you are going to have to slow your presentation down to entice the bite. By presenting your bait slowly the fish is more likely to pick it up because it does not have to  exert a lot of energy. That same lack of willingness to exert energy should be thought about when choosing the right lure. If the bait is large or even average often times the fish are going to be willing to strike. However,  if you fish smaller lures that seem less formidable you can often entice the bite. Lastly, when the fish does hit it is likely to be a very soft bite. Often not more than a slightly spongy feeling at the end of you line.
The ZMAN 3.75 inch Streak Z paired with a 1/8 ounce Trout Eye jig-head fished with 10 lb. braid and the St Croix 7 foot Light Power Moderate Action rod. The lighter line and lighter rod allow me to cast the lighter lures and the higher grade graphite in the Avid series allows me to feel even the softest bite. The action has been really steady with this combination producing a number a nice trout already this year.

The bite also seems to be better on the incoming tide for the trout if low tide is early enough to allow the water to warm up as it rolls across the sun heated mud. This pattern is producing a lot of 12-18 inch fish in 3-6 feet of water. The bigger fish however are coming much deeper, located along drop offs, during the outgoing tides. For post front conditions the trout are going to be holding close to the bottom. In this situation having a good fish finder can make all the difference. These fish may look more like rocks or small humps along the drop off slopes. Once you have located them it is important to remember to really slow down your presentation.

From now until early May are going to be your best chances at landing trophy trout. After mid May these fish are going to move into their spawning locations where they will stay until mid September. Also, it won’t be long now until I can start throwing topwater again so keep that rod ready as temperatures continue to warm up.  The rhythmic clacking of the bait as it walks the dog back and fourth filling the morning air only to have it happily interrupted by the aggressive strike of ole yellow mouth is one of the most exciting ways to fish. Click. Clack. Click. Clack. BOOM!

Get in touch with us

If you are looking to make a fishing charter reservation you can call, email, or use the webform below to get in touch with us.